In 1973 McCall’s recipe card collection would add yet another oddity to what they called, “The Contemporary Cooking” section called Jewel Fruit Tart. Looking at the photograph, I feel slightly nauseated; it’s hideous. Please elongate the word Hideous when you read it because that is how I am actually saying it.

I had a chance to review the ingredient list which consists of plenty of canned fruits such as peaches, mandarin oranges, and pear halves. Followed up by preserves, cream cheese, a few frozen berries and finally a fresh fruit, strawberries–then ruined by even more jelly. Good grief this sounds like a health food lovers nightmare.

Let me know if you’ve ever made or had this because I always love hearing from Y’all. I am actually thinking this might not be a bad idea if modified using uncanned fruit, What do you think? Let me know. END_OF_DOCUMENT_TOKEN_TO_BE_REPLACED

What can I say, about Perfection Salad? I am honestly thinking maybe in the 70’s it was perfect, by 2017 it looks perfectly awful. On a positive note, Perfection Salad has never graced my table at home or before my eyes elsewhere.

Perfection salad was a mere concoction of gelitan, sugar, apple juice, vinegar, shredded carrots, sliced celery, shredded cabbage, chopped green bell peppers, and pimento.As I am typing these ingredients I am wondering if the creator was reasonably sane. Is it me, Maybe so.

I would love to hear from any of you as to if you have tried Perfection Salad, was it good? I really am sincerely curious as to what responses I will get from all of you. Sometimes something sounds horrible but it really is good. Let me know in the comments below… END_OF_DOCUMENT_TOKEN_TO_BE_REPLACED

Love or hate the idea of fruitcake McCall’s decided to share their version of the dreaded fruitcake in their recipe card collection– It would be neatly tucked away in the Holidays section, Card 24-K, titled White Fruitcake. I’m not even sure how it got named White Fruitcake; looking at the recipe photo it doesn’t look white to me…Am I missing something? Clearly, I must be.

In my 44 years, I have suffered a few undesirable slices of this Christmas Season torture called Fruitcake. I’m really not a huge fan of fruitcake and might even bolt right out of the house if you are offering one slither of this cake poison to me.

I am aware that some love fruitcake and I am often told that the mail order cakes sent around the holidays truly do not reflect the taste of a homemade fruitcake. I am also Leary of those folks and mentally scream in my head, “Lies….ALL Lies!!!” 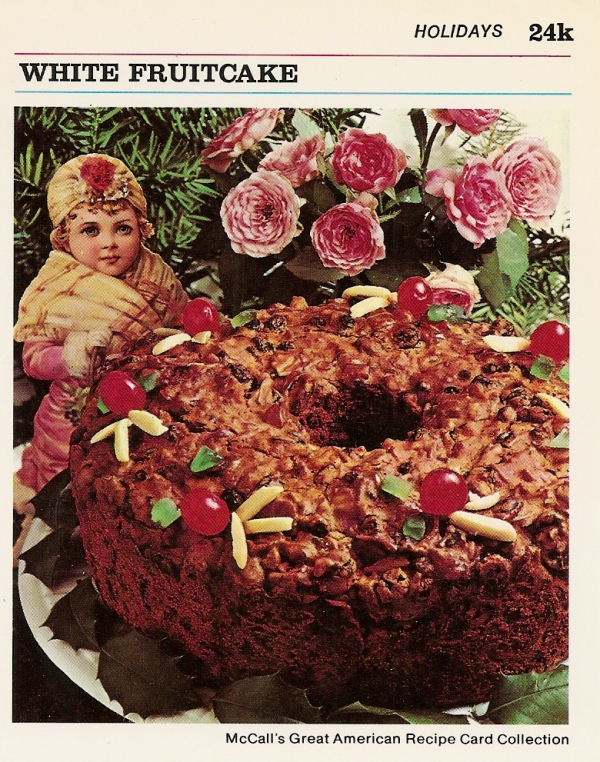 With that said I leave you with this recipe card to find out for yourself if this recipe is tasty or Christmas Season Torture. May the force be with you, my friends. Be sure to share your thoughts on fruitcake in the comments. Do you love them OR do you loath them as I do?

END_OF_DOCUMENT_TOKEN_TO_BE_REPLACED

Butterscotch Pecan Pie is one of the great Southern contenders that makes you jump for joy if you are a pecan and butterscotch kinda guy or gal. However, you really would not know that by the picture featured on this 1973  recipe card by The McCall Publishing Co.

The butterscotch and pecan flavor is subtle, adding an interesting twist to the Butterscotch Pecan Pie, without overwhelming your taste buds with this Southern-inspired pie that is guaranteed to possibly also cause a few cavities if eaten too often. 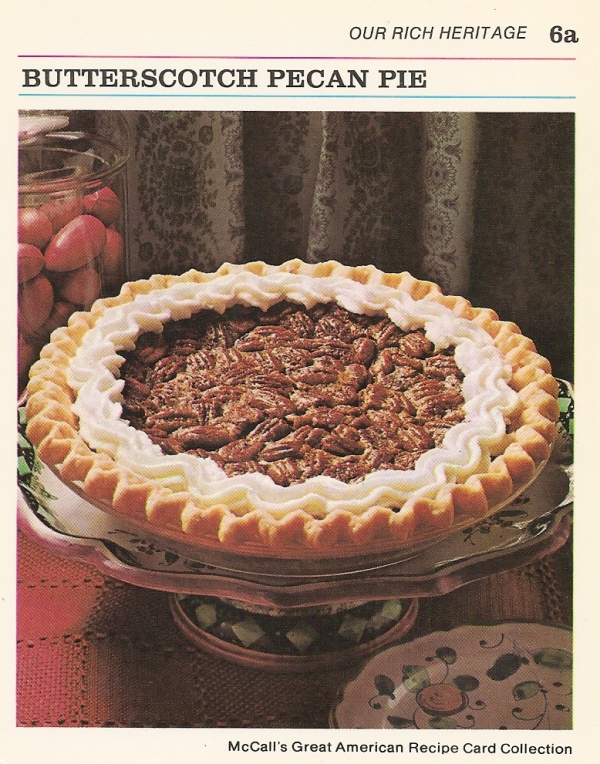 END_OF_DOCUMENT_TOKEN_TO_BE_REPLACED

Betty Crocker Hot Dog Cheesies recipe is very reminiscent of today’s Pinterest recipe for the Crescent Hot Dog and Cheese filled Cresent Rolls recipe we see being dubbed “Kid Friendly”; except it involves plain white bread instead of the crescent roll.Have you ever noticed many of the recipes we often think are new and trendy are actually spin-offs of recipes from our parent’s era?

Would I make this for my children today? I am going to have to answer this with not likely, Why you ask? Now before I answer this and get in hot water with a few of you parents for being a food snob, I don’t eat white bread or American cheese. I hate the way American cheese tastes and the way white bread feels in my mouth. Nothing personal directed at any parents, no babbling about nutrition no no’s; I just don’t like either or ingredient.

However, if I could change a few ingredients I would make this. What would I change? I’m glad you asked. I would go for a soft rye or pumpernickel, lacy Swiss cheese, and all beef hot dogs. You bet your bottom dollar that I would make in a heartbeat. 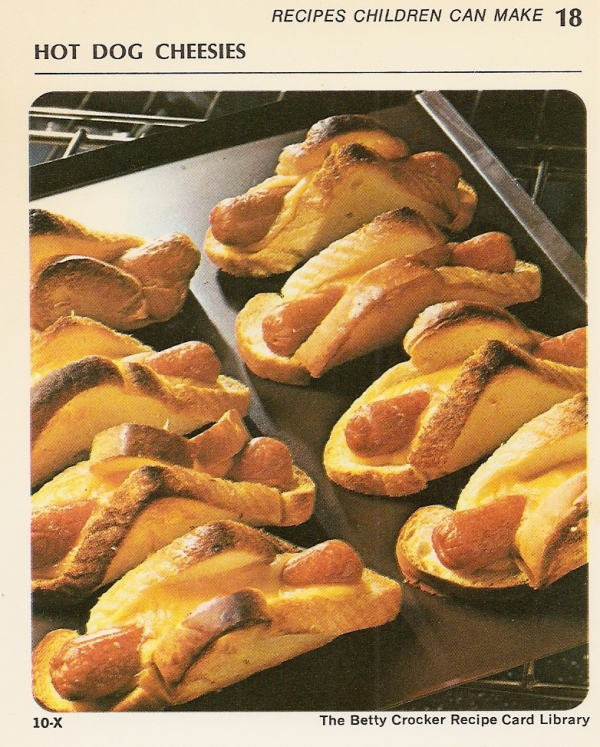 Would you make this for your children? If so would you change anything? What would you change about the McCall’s 1979 Hot Dog Cheesies? Let me know, I love hearing from you all and look forward to reading your comments and suggestions. END_OF_DOCUMENT_TOKEN_TO_BE_REPLACED

One of the most iconic southern dishes to date is Southern Fried Chicken. There a ton of recipes for Southern Fried Chicken as there are southern cooks, that have been passed down through generations. My family has lived in the South all their lives and I have never tasted McCall’s Batter-Fried Chicken to date. Now mind you, I have had what we call a wet/dry batter chicken, but just not this one.

I found the ingredients for this McCall’s 1973 Batter-Fried Chicken Recipe to be very interesting and at first shocking to see until I read the directions a bit more. Here’s a little hint they do something to their chicken that made my mouth drop—I won’t tell you, but if you are from the South you will find this a bit odd.

END_OF_DOCUMENT_TOKEN_TO_BE_REPLACED

Most versions of Moussaka are based primarily on sautéed eggplant and tomato, usually with ground meat. However, the Greek version includes layers of meat and eggplant topped with a Béchamel sauce and then baked in the oven.

There are other well-known variations on this basic recipe, sometimes with sauce on the top of the recipe, sometimes vegetables are added. These variants of the Moussaka may include, in addition to the eggplant slices, sautéed zucchini slices, partly-fried potato slices, or even sautéed mushrooms. There is a Vegan version in the Greek cookbook by Tselementes, which includes neither meat nor dairy products, just vegetables;ground eggplant is used instead of the ground meat, tomato sauce, and some bread crumbs are added.

In 1979 McCall’s added a recipe to their collection called Moussaka-In-A-Hurry for those who might be interested in what is called Contemporary cooking along with other recipes. Housewives and novice cooks everywhere would be able to literally make Moussaka-In-A-Hurry. 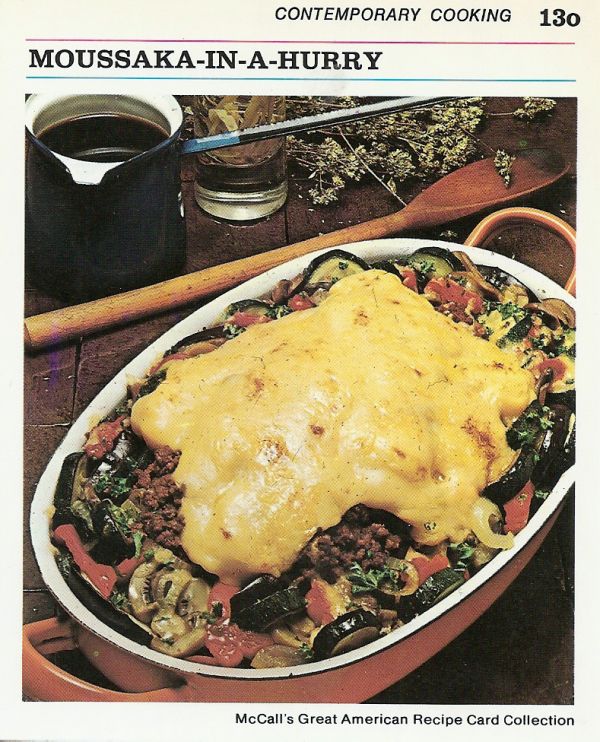 END_OF_DOCUMENT_TOKEN_TO_BE_REPLACED

I'm Heidy Hall-McCallum just the girl next door, that loves to cook and play in the kitchen!I LOVE ALL things Vintage and Retro! I have a large capacity of Vintage and Retro recipes I love to play around with.